I recently played to Icewind Dale I Enhanced Edition. Being a fan of the Baldur's Gate series and Icewind Dale II, discovering this game (I never played IWD1 due to OS compatibility issues) was pure delight.

One of the most striking thing in this game is the soundtrack. There is about 50 beautiful music tracks, each setting the scene for specific areas.

When you compare Icewind Dale I & II, you see that many areas from the first have been used in the second:

They reuse the same maps between the two games !
Dragon Age 2 did the quite same by re-using same dungeon areas in the campaign, but I believe Dragon Age failed compared to what did Icewind dale:

The Infinity Engine games (Icewind Dale, Baldur's Gate, ...) have this nice feature: When you click on some objects on the map, it fires a little popup giving a description of the clicked object.

I created about 7 dungeons since I joined the development team of La Colère d'Aurile (chronological order):

I always focused my dungeons on challenge: Usually the player must go to different points on the map to gather items, unlock things, ... and kill all monsters in their path.
Some dungeons are very nice and original (due to their scripts), but this time I really wanted to do something more "calm", focused on reflexion and storyline (a bit like Myst !).

There are still monsters, but they are here only because there can't be dungeons without monsters :)
Once you defeated the monsters, you can walk almost freely in the dungeon to find the secrets and resolve the enigmas...

This dungeon is about dwarves, old dwarves, ghost dwarves, cursed for the eternity...

I took my inspiration from:

I've not yet finished to write the storyline, but I have a good vision to what the quest will look like.

Using the Invisible Tile Construction Helper, you can remove any tile from an interior area and clear the vision to create your own world using only placeables.

Bridge over a lava river, inspired from The Lord of the Rings: 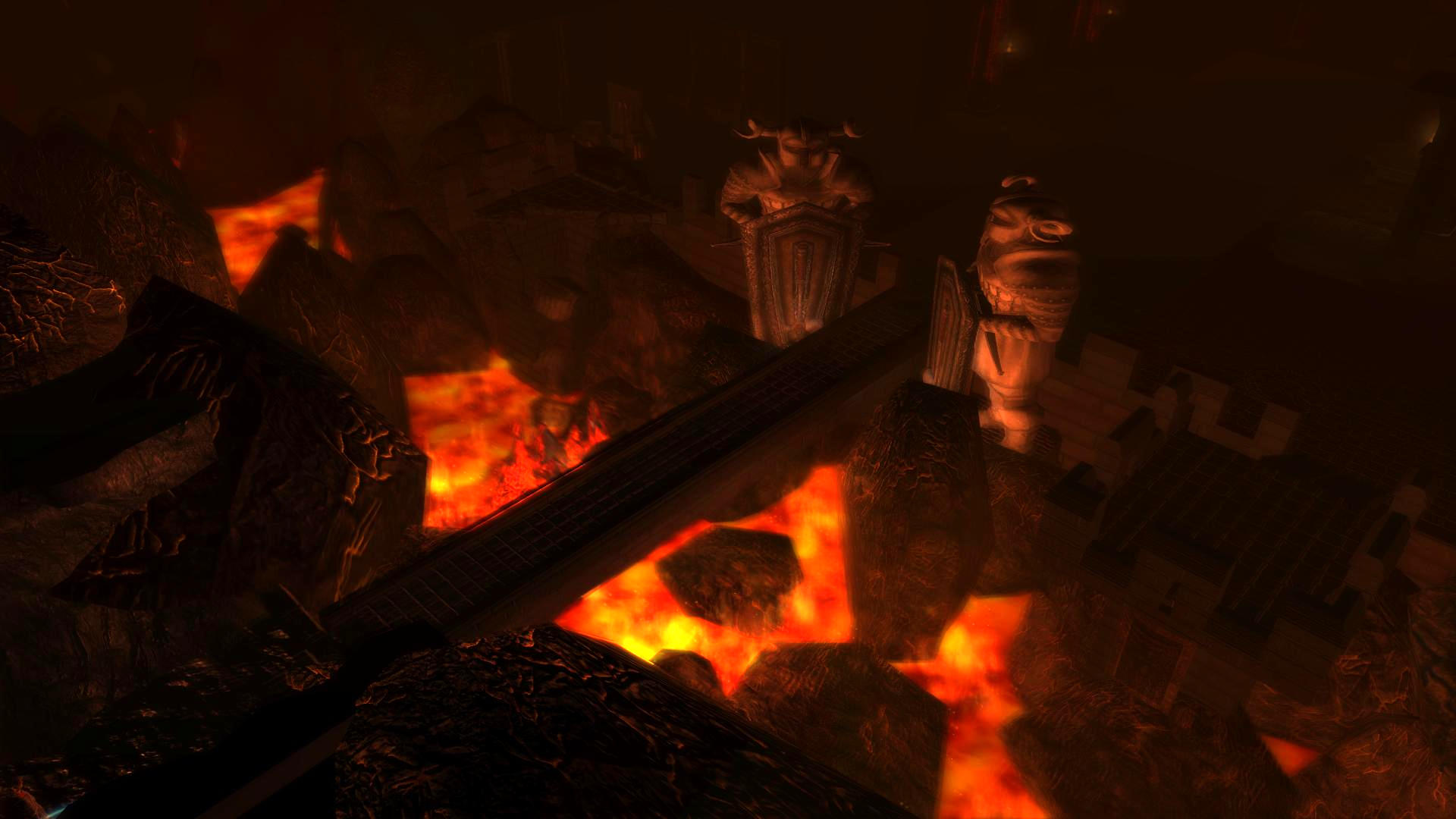 We are not anymore limited by the height of the map
The height 0 (where you are usually limited to) is at the same level as the bridge. 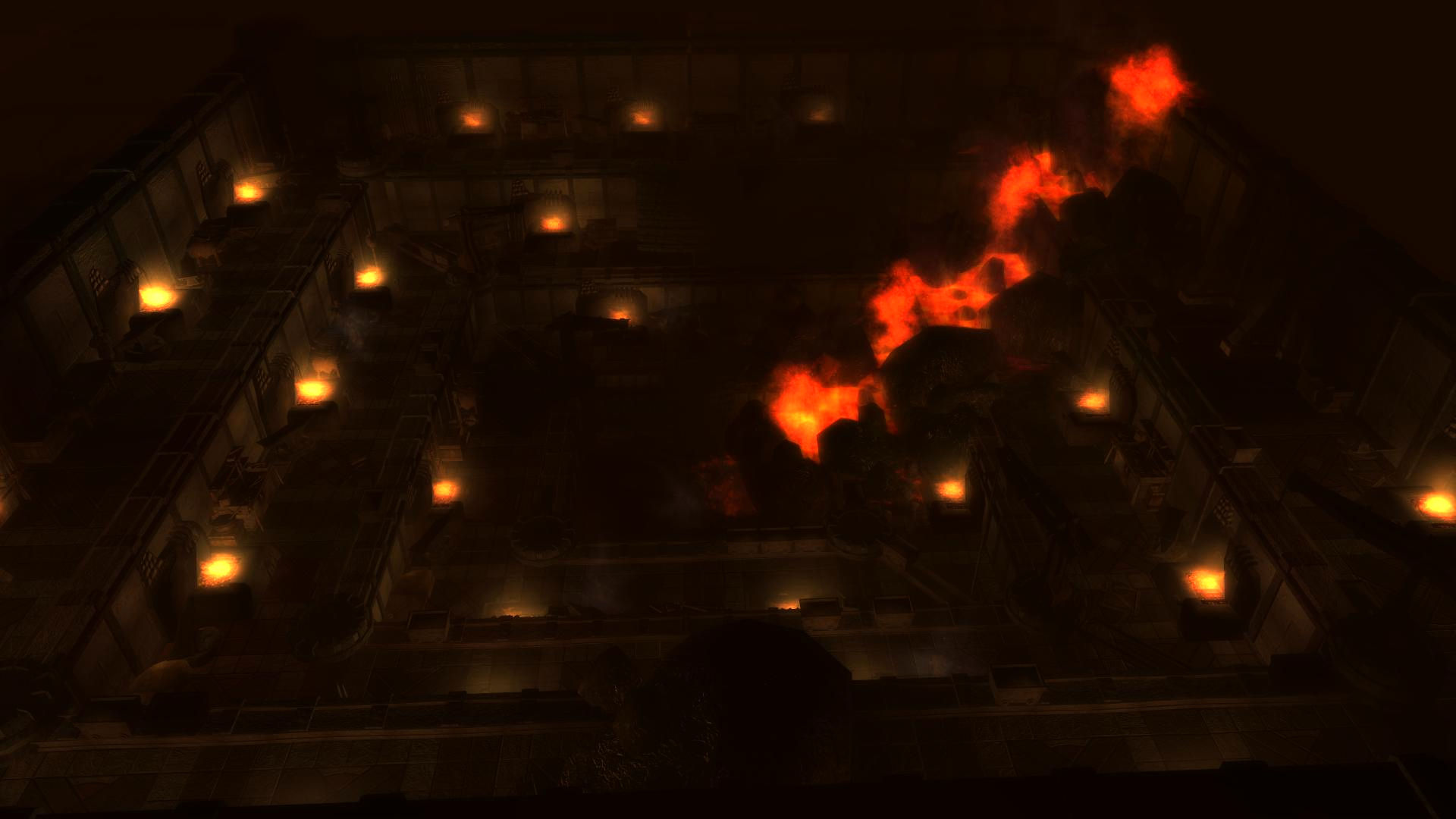 The height 0 is at the bottom of the forges.

Machine room, inspired from the Elemental plane of Air from Baldur's Gate 2: 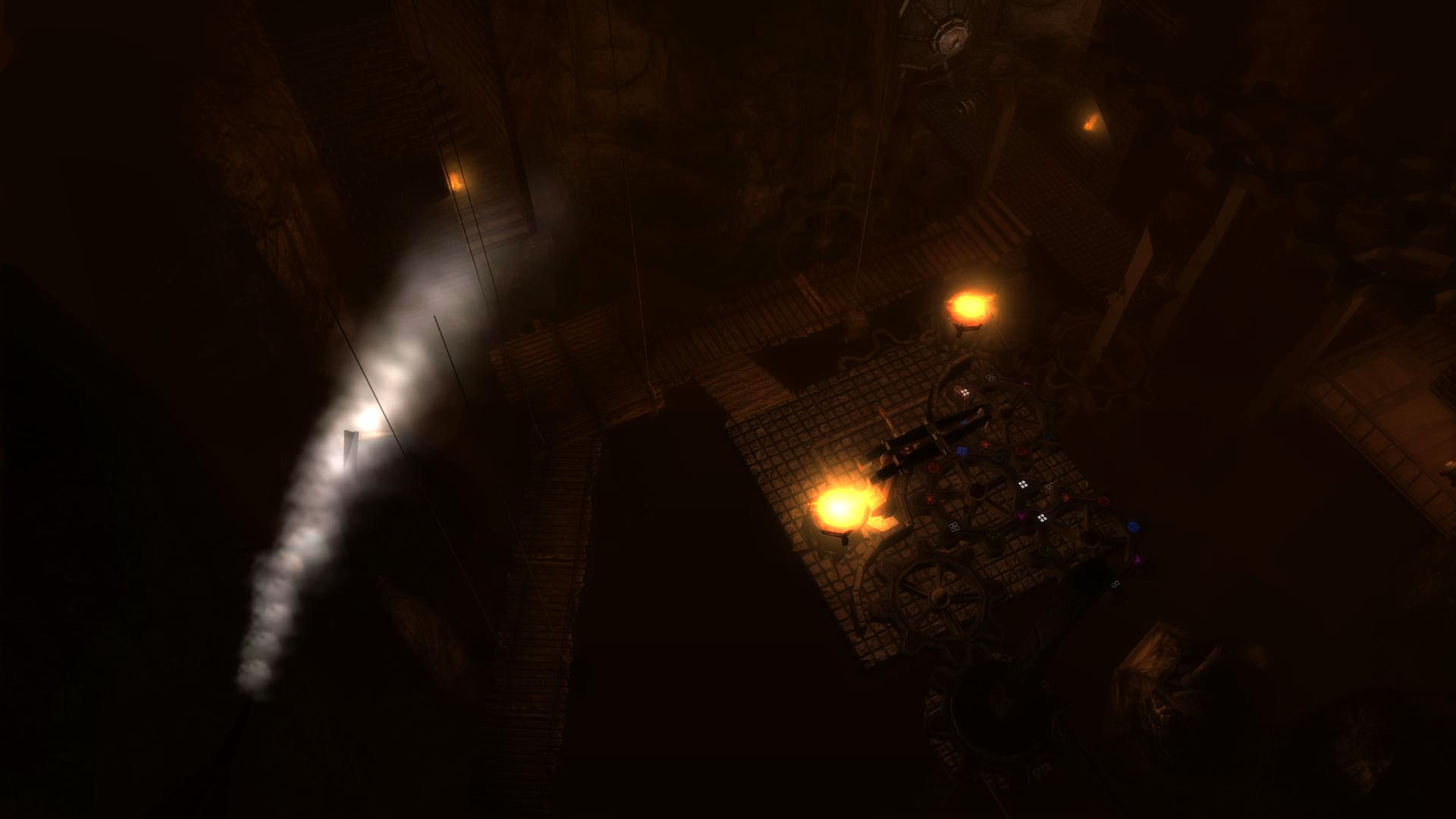 You can't see the bottom of the area, but it would be visible if i was using a standard tileset.
The height 0 is not far under the lowest wooden platforms.

This is the first puzzle the players will have to resolve: 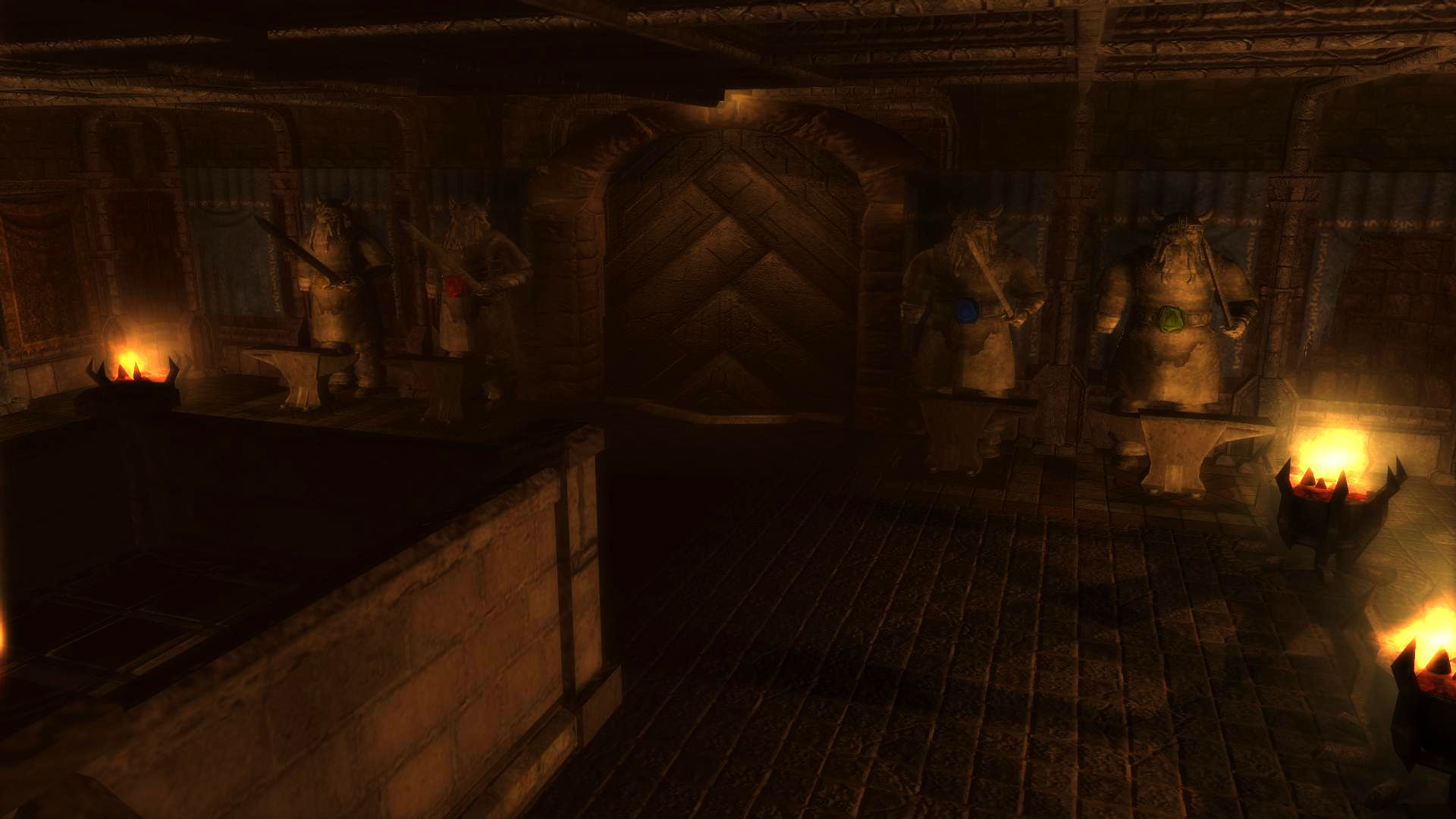 They must hit the anvils in the correct order to open the gate.
The sequence is 8 hit length, and the result (open the door or painful punishment) is only known at the end of the sequence.
Basically it is impossible to find the sequence without knowing it (it is so impossible that the players won't lose time brute-forcing the sequence)

The sequence randomly generated and is shown in another room not far from the gate: 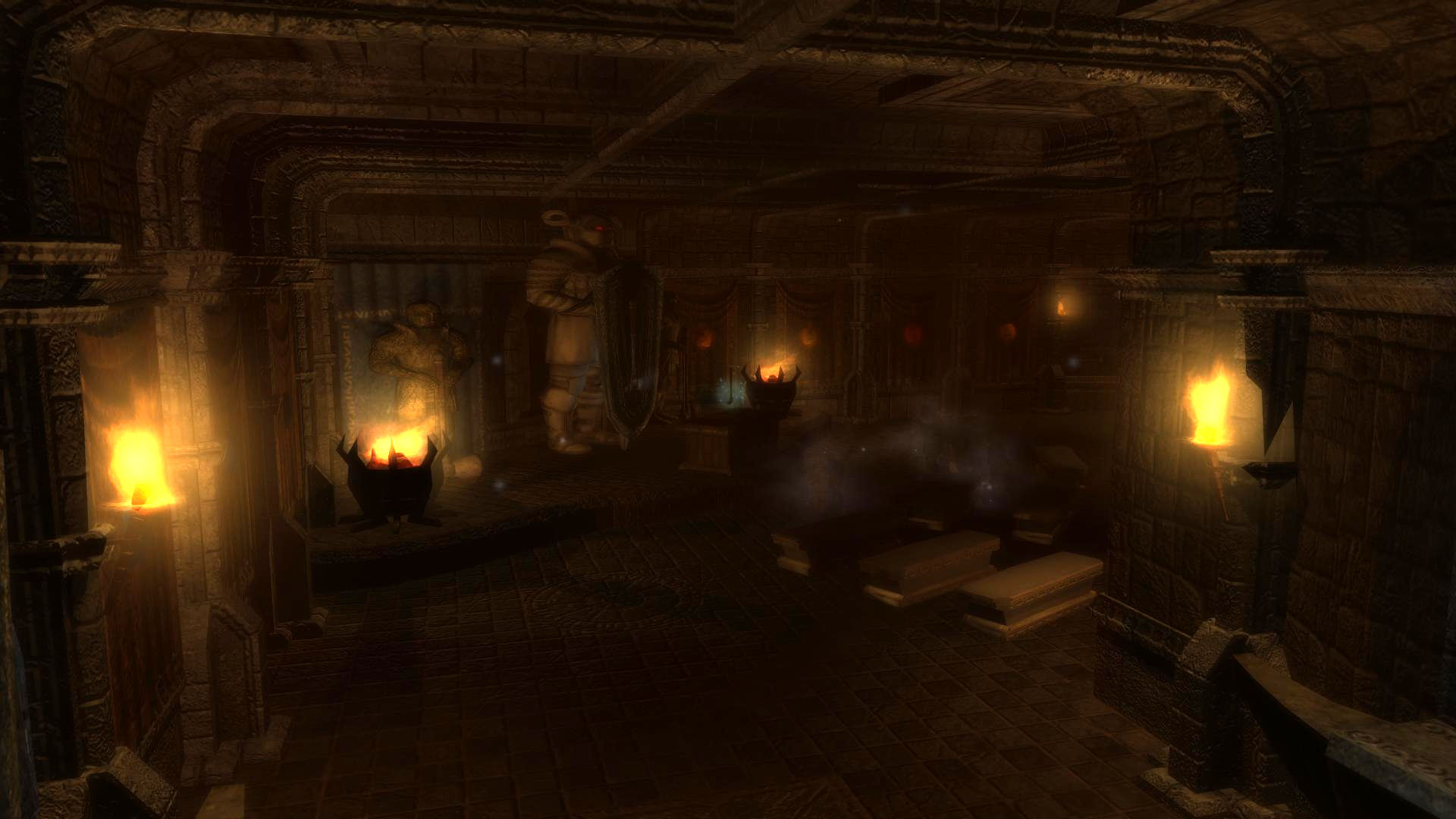 Look at the curtains on the wall: red-yellow-red-yellow
There are four other colors in the left wall to complete the sequence.

Place correctly the wheels to activate the machine: 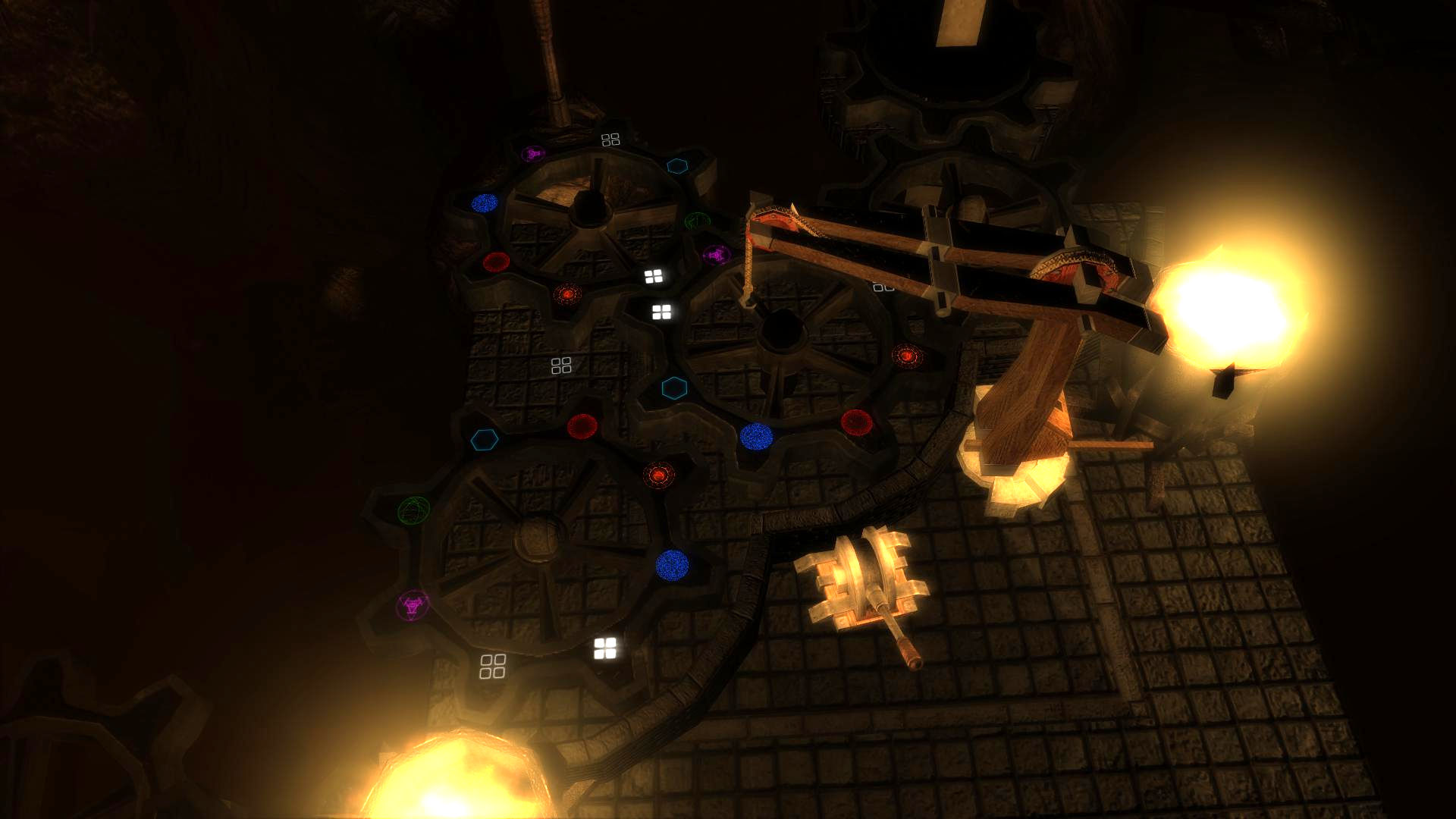 It took me quite long time to design this system because il was involving many things:

The final room of the dungeon isn't very far from its entry. The problem is that 3 huge gates are preventing the players from finishing the dungeon too soon.
They will have to find a way to go through the 3 doors, either by finding how to open it, or another way to skip it.
Clues will be spread all over the dungeon so careful players will quickly find the solution

I made explosive kegs:

The player will find one or two of these in the dungeon. He will have to make it explode near some specific rocks (clue given) to open a passage to the machine room.
If he blows up the kegs in the wrong place, he will fail the dungeon and will have to restart it from the beginning.
This is frustrating but I believe this will encourage players to restart with more attention rather than make them leave. 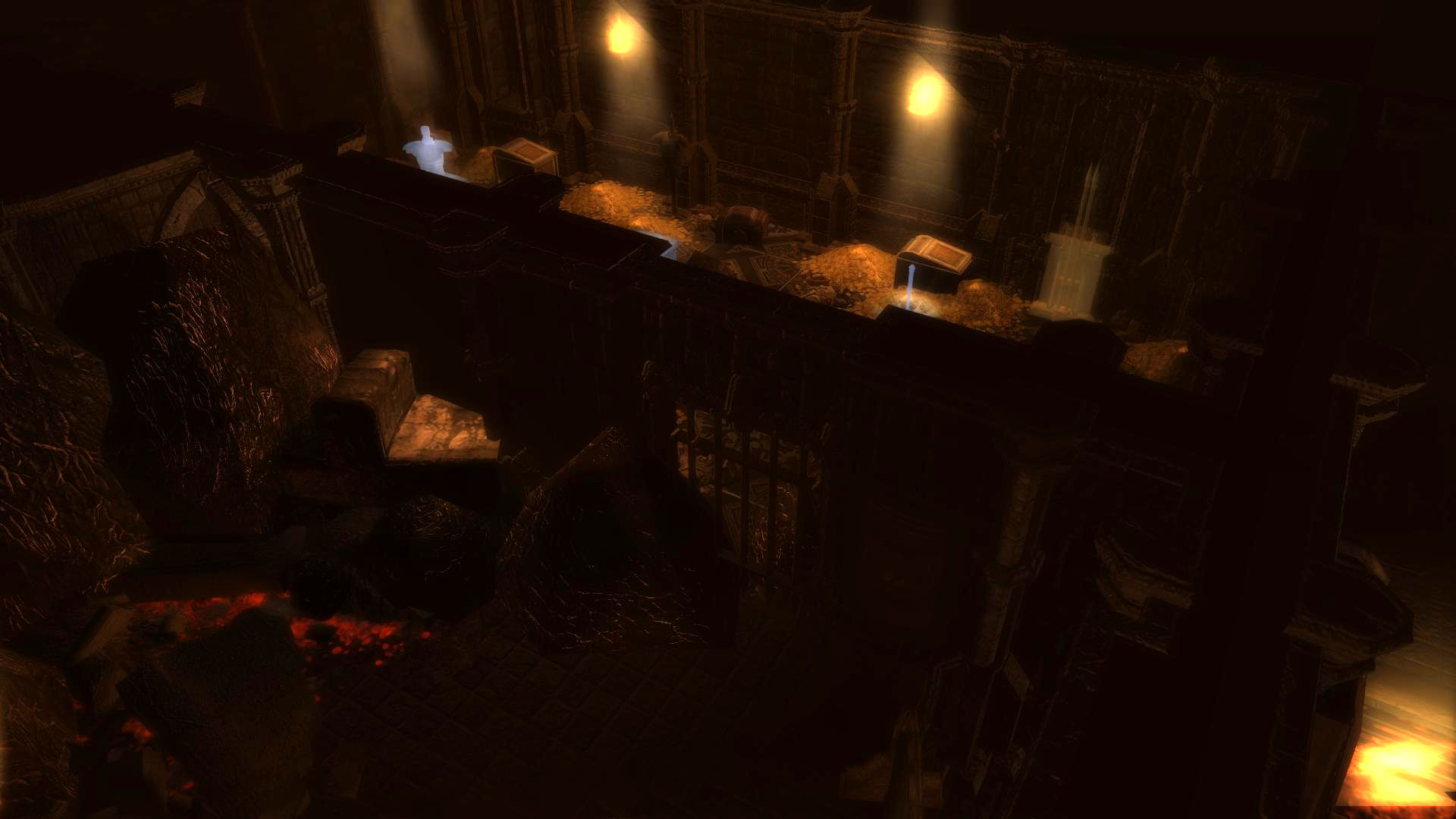 This room is full of gold and magic items. Know what? you can't enter : The door is damaged and blocked. There is absolutely no way to enter.

Just for fun I put a useless gong next to the door, so players can think there is something to do with it to unlock the door... :)

The ambiance must be mysterious and sometimes scary.

The combat music is controlled by NWN2, but also by some encounters that launch the music some seconds before the combat begins.

Some encounters spawn continuously, for ~1 minute, aggressive dwarf ghosts.
Before they spawns the ghosts, they can play some events:

There are dwarf ghosts that are not aggressive: They are only repeating some random unfinished sentences, ignoring the player.
They are here to set the ambiance and frustrate the player: You can see and hear them from far, but once you approach them, they disappear before you can touch or speak with them...

There are other dwarves that are more aggressive, and are used as encounter monsters.

Wraith are aggressive ghosts that looks like the Ringwraiths in the Lord of the Rings.
They randomly appear behind your back, screaming and making creepy noises, to attack you once before disappearing.

They automatically touch you, and you must succeed a will save versus death or die immediately. If you are still alive, you will have to do a will save against fear or run away randomly in the room :)

They are the guardians of the dwarf complex.
They appear deactivated, and are harmless but invulnerable until activated.
How they are activated? The player don't know... but you should avoid touching what they protect :)

There are different types of golem:

I'm still working on the dungeon, so many things will change.
Thank you for reading ;)

Enter your email
Subscribe
DDC/CI is a set of protocols for controlling monitor features like brightness, contrast, color temperature, input source, ... over the display cable (VGA, DVI, HDMI, Display port, ...). The protocol is fairly old (1998) and nowadays most devices support it. I'm currently using it to: * Adjust the brightness of my two

After years of faithful and intense C++ coding, I found another language so awesome that it took my heart in a few month : the D programming language ! I discovered this language on a forum few years ago, but didn't see it like something that worth spending time on it. In 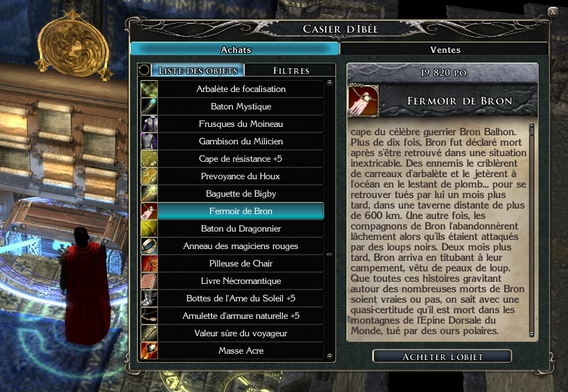 I've donne a pretty nice work on my Neverwinter Nights 2 server ("La Colère d'Aurile") : a complete auction house This system replaces the older one that has been removed due to item duplications caused by the script being aborted after a short time (a security on the game server to